Many years ago there was a man of wealth who had a very headstrong and curious daughter. Her father was a large land owner on the Island but part of his estate was a place that was well-known for strange goings on. Although the land was fertile, it was never worked; it was said that is family had struck a deal with the Ylfe to ensure the rest of his estate was always profitable. The price for this magical protection was that this field would be left fallow and be the domain of the imps.

The man's daughter would often go off walking when the weather was fine and spend her time walking the downs and meadows that belonged to her father. Everytime she went to leave the house her father would say "Stay away from the fallow field, that place is not for us to travel. However, time and again one of the workers would spot the daughter crossing the Fallow Field running and dancing. The worker would always report back to her father and each time her father would scold her, “Daughter, that place is not for you, please take the road rather than crossing that field. Nothing good can come of you crossing that place.”

The maiden would not listen and continued to cut across the Fallow Field. She never believed the stories and cutting across the field would save her half an hour. The view was spectacular, to the east she would see the sea and the the west the rolling hills that lead all the way to her father's house. Although she didn't believe the stories, she had to admit there was something very different about this place. He her it seemed like her voice carried further and her feet were lighter as she danced. She always looked forward to this part of her adventures, it always felt it was worth the stern words she would get from her father.

One day, in late June, when the wild flowers were in full bloom and the days were long and hot, the maiden decided to once again go on an adventure. Like every time she left the house, her father would remind her not to go through the Fallow Field.  The Maiden agreed to stay away from the field, or at the very least she would try not to be seen.

The young woman thought the day was so lovely that she would take some bread and cheese and have a picnic. She set off on her travels across her father's land, cross crossing the meadows and across the downs. The sun continued to climb in the sky and but the time she had made her way across the estate she realised it was already close to midday. She found herself sanding at the hedge that marked the boundary to the to Fallow Field and stopped for a moment contemplating her father's words.

She considered things for a moment, directly across the field was a lovely wooded area where she could stop, rest and eat her meal. If she listened to her father's words, it would take another half an our to get there. However, if she cut through the field, she could go sit by a young oak tree in the centre of the field, enjoy the view and take in the sunlight as it played over the wildflowers.

Taking great care not to be seen she climbed through a small break in the hedge and made her way down the slight incline that took her directly to the middle of the field. As she walked through the grass she felt her feet spring like she was bouncing on a soft bed. She quietly sang to herself, a little nonsense song about butterflies and honey as she made her was to the young oak.

The heat of the day was around her and with every foot fall she smells of summer tickled at her nose. When she got to the tree, it was all should could not to not just flop down in a tired heap. She made herself comfortable and opened the little package of food she had made for herself and started to eat.

After some time, to her surprise a lamb came walking up to her from no where it seemed. She looked around for the young sheep's mother but couldn't see anything near by. To make things even more curious the lamb showed no fear and so it appeared to the young woman that is was tame.

“Hello beautiful thing,” she said to the lamb and held out her hand. “Are you lost? Where is your mother my precious?”

The lamb bleated and slowly came closer to the maiden. It stopped for a moment, bowed its head and sniffed her fingers. The maiden looked at the beautiful create and giggled to herself at the light touch of the lambs nose on her fingertips.

After a moment the lamb was well within the young woman's reach, so she stroked its nose and smiled. She was sure that the lamb winked at her and even make a little smile, but he knew it was her imagination. “What a delight you are.” the maiden squealed.

At that moment and without warning, the lamb looked at the maiden, dead in the eyes and  bit her on the finger. The girl recoiled, in shock and in pain. She tried to push herself away but found she could not stand and was only able to stumble back against the trunk. As her bod hit the hard bark of the tree she felt a great heat emanating form bite on her hand. This heat spread out rapidly and consumed her entire body like a fever until finally she was unable to move, only lay there helpless. The fever quickly turned into an all-consuming tiredness. This was a tiredness that forced her eyes to close and before she knew what was happening she had passed into a deep slumber.

For what the girl did not know was, the lamb was an imp in disguise. For years the magical folk had seen her passing over their lands and for years had resented her for it. They could no longer  stand to have this trespass go unpunished and the way the saw it, they had always kept up their end of the deal with her father.  The Ylfe devised a plan to make her pay for her indiscretions and had waited for the perfect moment.

When the lamb bit her, it placed a strong spell upon her, a bond that could not easily be broken. For the Ylfen magic is not one that any normal human can oppose. Even those of us learned in the magical arts know it is wise to not challenge such things; this sort of magic is to the Ylfe as breathing is to you and I.

When the girl did not return that evening her father sent out search parties, but his daughter could not be found. They searched high and low, through every part of their master's lands until they finally came to the Fallow Field. None of the workers dared go in there, for they knew the mischief that was waiting for them over the other side of the hedge.

Her father was desperate and armed himself with charms and a good strong cudgel and made his way into the field. Alone he walked every inch of it, calling to his daughter and cursing the name of the Ylfe, but he found nothing.

The young women's father spent the rest of his days a broken man, the light from his life left him on that day. It is said that his good fortune ended as well, for a great blight came over his livestock and all died a miserable death. Ever crop that was planted died and her man ended you dying in poverty, his lands sold to pay his debts.

You see, not only had he lost his only daughter, but as far as the magic folk we concerned their agreement has been broken. For the Ylfe were not content to take away their protective enchantments and let the wyrd fall what may, they are also spiteful and took revenge in all ways they could.

What become of the maiden I hear you ask? As she drifted into her slumber, it is said that young oak tree took pity on the maiden. The oak knew the ways of the Ylfe and her knew what they were capable of. But their magic is no match for something as mighty as a prince of the wood.

As the glamours of the other place were descending, making it impossible for any human to see the enchanted child the oak made it clear she was under his protection.  It grew its branches around her and kept her safe, eventually surrounding her completely with its mighty trunk, protecting her from the vengeful temptations of the magical folk.

The oak grew large and strong, and became the largest tree in the woodland that eventually took over the Fallow Field. The prince grew into a king of the trees and forever is protecting the sleeping maiden.

The oak tree is still here on the Island if you know where to look and no one dares to cut it down. It sand in its wood, in a place where will do not like to longer for too long. The wayfarer does not tarry in this corner of the world, especially at dusk for people know that misadventure will come to those the idol amongst these trees.

The maiden still sleeps, warm and protected within and the tree's oath still stands. Those people who know this tree will stop and pay their respects and on warm summers days they may even leave a wild flower before the trunk of the great oak. 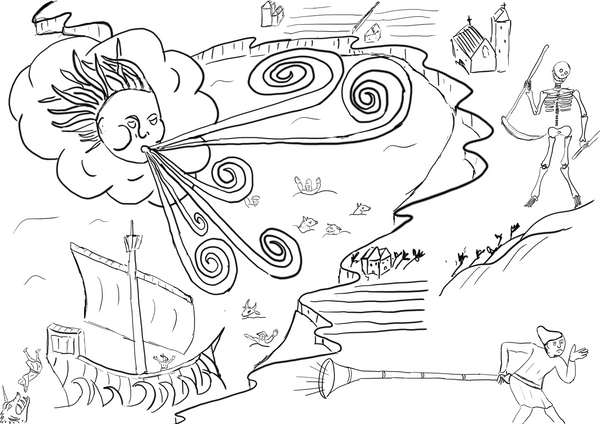 In this article we explore some lost terms and folklore about the weather. 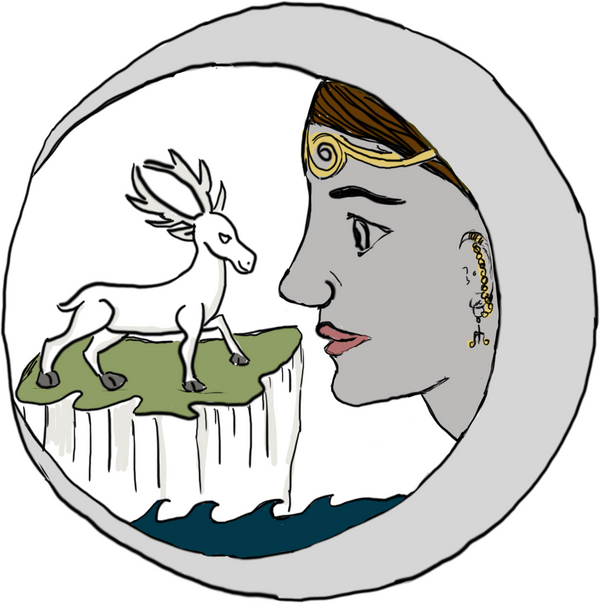 The full moon of July is called the Stag Moon. This is the story of how that came to be.